In addition to the recreational thinking she does on Says You!, Francine plays a bit of recreational polo. You can read more about what attracted her to the game in this year’s edition of Sarasota’s Polo Magazine.

Flip to page 59 to read her Q&A – www.sarasotapolo.com/sponsor/magazine/ 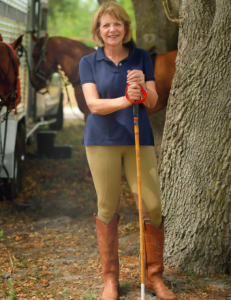 This week Tony’s team was tasked with defining “woo-woo.” Dana, who listens on KQED from San Francisco, provided a possible etymology:

The term is a stylized imitation of the old science fiction movie sound track use of the Theremin, one of the oldest electronic music instruments. It is played by moving a hand in front of a little antenna on the instrument which controls pitch. Theremins make a simple nearly sinusoidal tone, and the free space movement of hands as the controller makes all sounds into strong vibrato and glissandos. They were popular in 1950’s cheesy sci-fi movies. People imitate their sounds by going “Wooo-Woooo.” Google Theremin to learn about León Theremin, the Russian scientist who invented this instrument in the early 1930’s.

Listen to a theremin in action: