It is with great sadness that the cast and crew of Says You! announce the death of our host, Richard Sher. After a six-month battle with cancer, Richard died on Monday, February 9, 2015. It was Richard’s wish that the show continue — the laughter it generates from you, our loyal listeners, will be the greatest gift that could possibly be hoped for… 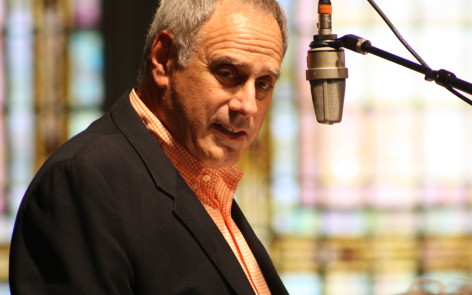 We have come now to the final round of “Odd Man Out” with Richard Sher, our beloved, long-time host of Says You! Richard died February 9 at the age of 66… Our six regular panelists, whom Sher cast in the original pilot — Paula Lyons, Arnie Reisman, Tony Kahn, Carolyn Faye Fox, Barry Nolan, and Francine Achbar along with Antonio Oliart, the quintessential engineer, and script support from Phil Salkind — have remained together for two decades. The show is a true ensemble, a real family experience. Through the years they have shared engagements, marriages, births and birthdays, graduations and sadly darker moments that brought this quirky cast of characters even closer — caring for one another through life’s disappointments. For now they are all grieving the loss of Richard but each knows it was Richard’s wish that they continue to play, to learn, to love and to laugh in the spirit of Says You! Now we listen to you, our listeners…

Click below to listen to Ty Robertson’s Tribute to Richard Sher.

In the submission form below, please share with us your most memorable moments of listening to the show at home or at a live taping – we will compile and share your memories for a future tribute to the Man of Many Words.

The text from Robertson’s audio:

“I love words. I love word games, I can sit and read the dictionary for hours. I wish I could say this love of words makes me an exceptionally articulate speaker. But alas, my love of words is largely a one way affection – so I leave witty repartee to people who have the gift – like Richard Sher, creator and host of the public radio program, Says You!

“I was a devoted fan. What Richard invented was something from a bygone era, something that conjured the conversation one might have overheard sitting near The Vicious Circle’s lunchtime gatherings at the Algonquin Hotel. It was full of wisecracks, wordplay and witticisms. And yes… whimsy, bluff and bluster. To tune in to the show was to take a break from mediocrity, to join listeners everywhere in the reverence for words and knowledge in an irreverent and hilarious forum. We fans of the show could count on regular panelists Arnie, Francine, Paula, Barry, Tony and Carolyn to be our proxies in the fun.

“But what made the show truly remarkable was the spirit of its host. Richard was smart, funny, and quick witted to be sure, but it was his kindness and generosity. He had a unique ability to make you feel like you were the center of his universe when he was talking to you. That’s what made him a great showman. Over the years Says You! came to tape live shows in Vermont, and I was lucky enough to be Richard’s contact for making arrangements. Richard preferred the phone to email, and talking to him never failed to turn a grey day into sunshine and delight. I quickly learned all his phone numbers so with the aid of Caller ID, I would never miss one of his calls.

“Richard passed away far too soon on February 9th, at age 66. But he leaves behind a body of work worthy of archiving for the future as a window into what we might call “Boomer Humor” – a sense of humor informed by being forced to learn the classics tempered by the Summer of Love, and these days, all things digital.

“Like many, I’m heartbroken at the loss of a public radio treasure, and I’m also wondering what will happen to Says You! It wouldn’t be the same without Richard, but I hope the gang, once the grieving is done, will be able to rally and keep Says You! in production. And according to SaysYou.net, Richard certainly wanted it that way.”

This tribute was originally published by Vermont Public Radio.