Trevan writes – “The Brits have retreated from referring to one million million as a billion and have converted to a thousand million as being a billion.”
In SY-2401 R3 Q5 we said that what the British call “a billion” is what Americans call “a trillion.” While this may have been true in the UK for centuries it was actually altered in the 1970’s.
We found that the change was due to a combination of economic progress and inflation. As numbers were needed to define financial sums, a billion was no longer the benchmark.

According to BBC – The words billion and trillion, or variations on them, were first documented by French mathematicians in the 15th Century.

“The musical interlude tonight while we pondered the meaning and derivation of the mystery word was exquisite! I couldn’t hear what the tune was or who was playing it. Could you hip me to this?
Thanks!”

Head on over to our website! All of our guests get featured on the Who’s Who page. Just select musicians and it will bring you to an updated listing of performers! 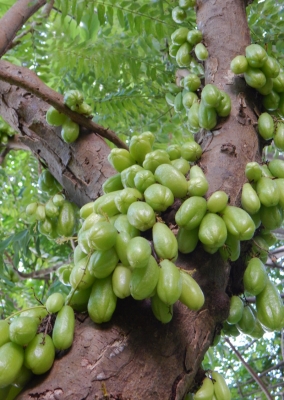 “I was listening to your recent show and got excited as i know what a bilimbing is (spelled with that extra “i”, sometimes with an “e”) but none of your definitions was for the Indonesian fruit, bilimbing.
Rucina had the honor of guiding President Obama and his family in Bali in July 2017 with her tour company  DHYANA PUTRI ADVENTURES.

Averrhoa bilimbi is a small tropical tree native to Indonesia, reaching up to 15m in height.

Thanks Rucina for teaching us about Bali and its native foliage.